To achieve our target R-value insulating performance of ~R58 of our exterior wall shell building envelope consisting of an 8.25" SIP wall (R38) , we needed to create five inches of additional thickness of insulation.  To accomplish this we created an additional interior 2x4 stud wall that included an inch and a half spacing to allow for plumbing, electrical wiring, and our ERV/HRV mechanical ventilation "ducting."

Double framing a passive house can, of course, be achieved with a double stud construction (preferably with staggered studs), whether they be based upon 2x4s, 2x6s, or other combinations of stud widths.  But, in our case we decided to construct our double wall system using SIPs and studs at our above ground exterior shell. 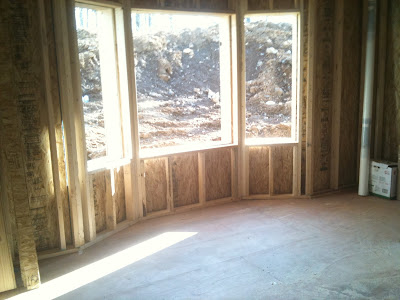 The same was true for our below grade, superior wall system.  The Xi superior walls provided us an R.12.5, consisting of roughly two inches of high density water impervious concrete, approximately two inches of insulating foam, followed by six inches of cavity between their studs.  By adding an additional five inches with the same 2x4 wooden stud and the one and half inch, spacing we accomplished similar thermal insulating performance of ~R55 with our exterior basement double wall system.

Of course, a double wall system can also be constructed in conjunction with ICF (insulated concrete form) exterior walls whether ICFs are used below and/or above grade.

Beyond insulating value, the double wall system assisted us achieving our air tightness target of 0.2 ACH50, exceeding the passive house standard of 0.6 ACH50 (more on this in a later article).  It also allowed us to achieve the effective result of the thermally broken insulating value of R12.5 where some exterior penetrations existed.(more on this in a future article).