While we fully expected that we would not require active air-conditioning in our passive house, we did anticipate the need for active heating.

The notion of passively heating a home from the thermal energy of the sun alone, certainly sounds appealing enough, but trust me, there are going to plenty enough days during the colder months when long-periods of overcast are going to prevent these sorts of natural interior heat-gains.  And given the sheer size of our home and the layout of the rooms--even with a very open floor plan--active heating was going to be required.

While hydronic radiant floor heating is regarded as being a superior way of heating, we would still have to concern ourselves with a means of air-conditioning (if we ever needed it or wanted to use it) using another system.  This, in my view, added unnecessary complexity to the active heating and cooling systems--since we would have to install and maintain two systems.

Geothermal initially looked appealing, given their advertised high COPs (coefficient of performance) and the ability to optionally provide domestic hot-water (for "free").  However, these units are expensive to install, lose a lot of their touted efficiency to their ducting and air-handling systems as well as their fluid circulation systems.  Furthermore, these systems' heating and cooling capacities would far exceed the heating and cooling loads that our passive house would present.

Since our desire was to use electric everywhere (to easily offset with a photo-voltaic system) to achieve an either net-zero or net-negative (generating more onsite electricity than consumed) building, we decided on the use of ductless mini-splits to do the job.  A great thing about ducted mini-splits is that they are dirt cheap and super energy efficient.  Effectively equaling (if not exceeding) the efficiencies of their more elaborate subterranean counterparts. In the case of Fujitsu, their minis (heat-pumps) are rated at a whopping 27.2 SEER and have an EER of 15, at optimal outside conditions.

Ductless mini splits can also be purchased as ducted units, however adding additional ducting work was not desirable and ultimate efficiencies are reduced relative to their non-ducted counterparts.

The approach we used was to install two ductless mini-splits centrally located in our two story great-room and to use the Zehnder passive house ventilation system to effectively distribute the conditioned air throughout the home.

At the time of our selection, Fujitsu was just about to release their revised Fujitsu 9RLS2, Fujitsu 12RLS2, Fujitsu 15RLS2 ductless mini-splits.  The minis were designed to operate at temperatures of -5 degrees fahrenheit and perform at their rated heating capacity to 20F.  This was an improvement over their previous RLS models.  The timing was perfect because we were able to install, we understand, the very first RLS2 models introduced to North America!

The question then became, what specific model would we require?  There are three sizes available from Fujitsu, the 9000/btu/hr 9RLS2, the 12000/btu/hr 12RLS2, and the 15000btu/hr 15RLS2.  Interestingly enough, when it comes to heating, all three units provide nearly the same level of maximum capacity of 22,000/btu/hr.  It's only with their cooling mode, that their relative capacities become more differentiated.  Again, since our active air-conditioning requirements were expected to be absolutely minimal, we opted for the most efficient unit of the bunch, the 9RLS2.

During a recent conversation with Fujitsu, I was informed that Fujitsu will soon be introducing an update to the RLS2 models--hyper-inverter model versions: the Fujitsu 9RLS2h, Fujitsu 12RLS2h, Fujitsu 15RLS2h.

The interior air-handlers remained unchanged, but the exterior units will now be able to operate to -15F, opening up markets in more northern climate zones.  Performance efficiencies appear to be nearly identical, until the outside temperatures reach the extreme cold of the spectrum.  I also understand that Fujitsu has improved the efficiency of their defrost cycle with these updated units. 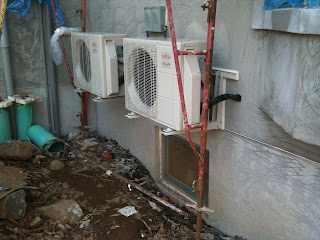 After twelve months of usage, we are very pleased with the performance of these minis.  In a future article, I will address some location placement tweaks we made to our ductless mini splits that are proving to be extremely effective.

It is really amazing to see that even during the extreme cold temperatures that we have been experiencing lately (lows in the single-digits and highs in the low 10s), that merely two space heaters can effectively heat an entire home of 6000SF using less than two tons of heating capacity!

During the summer months of last year when outside temperatures hit an excess of 105F, we were able to maintain an average in-house temperature of 67F using only the dehumidification (dry) mode of ONE unit! Amazing, indeed. 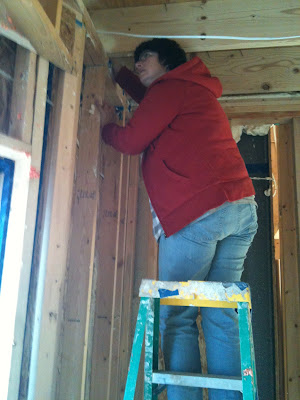