May 07, 2012
Having been in a lot of homes using, what I regard, as a dated approach, just about every single one smelled "musty," felt cold and damp, and had water-leakage issues.  Cinder blocks are porous and, in my opinion, will eventually fail to some degree over time.

I quickly discarded his intended approach and instead examined some more modern approaches, including:

We ultimately chose the Superior Wall Xi system, with the highest R-value of 12.5 that was available from them at the time.  (Note: Superior Walls has since introduced the Xi Plus wall that claims to have an R-value of 21.5 as a result of additional foam insulation of approximately 2 1/2 more inches). 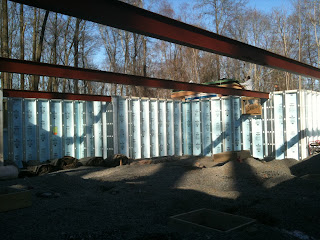 Builders generally are resistive to the notion of using them, because their structural strength comes from the inter-connected-wall-structure itself and do not come from the use of conventional footing.  This is a common theme when designing homes of this nature--overcoming misconceptions of conventional building techniques.

The Superior wall systems are custom-designed and fabricated by computer, with precise opening cutouts for windows and doors, and come delivered in sections. One of the great attributes of such a wall system is precise tolerances.  We believe our walls are level to within 1/4 inches from one side to another side of our foundation.  Even our finish floor installers noticed how unusually level our sub-floors were/

One of the most surprising outcomes of our selection of Superior Walls was that the cost for this wall system, which included delivery and installation, was very much inline with other conventional foundation wall systems.  We selected extra tall walls of 10 feet, anticipating that we were going to heavily insulate our concrete slab and we wanted to net about an eight-foot to nine-foot ceiling height.

Since the superior wall system is already fabricated, it is simply a matter of installing them with a small crew with a crane that drops them right into place.  As the concrete is already cured at >5000lbs PSI (although additional curing will take place over time which increases density to upwards of 6000lbs PSI), there is no waiting for poured concrete to harden as would be the case with conventional or ICF wall construction.  Superior walls can also be installed in cold weather without concern for special concrete mixes or extended drying times.


As mentioned earlier, as the concrete fascia cures to a very dense form, the walls are for all intents and purposes do not allow water or moisture to penetrate to the inside of the building envelope, eliminating any potential mustiness and mold formation.  Basements made with these walls tend to be quite dry and absent of the typical basement feeling.
First Passive House in Pennsylvania
Groundbreaking Date: September, 2010. Please direct inquiries to: inquiries@passivehousepa.com